What Are The Top 5 New Features In MacOS Mojave?

In late September, Apple released the latest version of its Macintosh operating system—MacOS 10.14. Known as Mojave, the update includes a variety of useful tools designed to delight casual and fanatic Apple users alike. Here are the top five new features to look for in MacOS Mojave.

What Do I Need to Know About Security Changes in Mojave?

Apple is primarily known for having robust security features and this update is no exception, as it allows greater control over your personal information. Applications now ask your permission before accessing the camera or microphone. You’ll also receive a prompt for approval anytime an app attempts to access your message history or mail database.

Additionally, MacOS Mojave comes with an updated version of Safari, which includes an Enhanced Tracking Prevention feature. This tool puts a high emphasis at keeping your personal information private, including safeguarding against social media like, share, and comment widgets that track you without permission.

What Changes Happened to Quick Look in MacOS Mojave?

Although Quick Look has been around for a long time, MacOS Mojave makes it easier than ever to view photos and files without having to open them in an app. Now, you can utilize a selection of markup tools to add notations, shapes, or highlight important information with only a few mouse clicks. You can rotate or crop photos, and there are even a few tools to allow video editing without having to open QuickTime.

You may also use Quick Look to electronically sign a document with your digital signatures. This is especially handy for PDFs and scanned documents, where going through the process to open an application for a such a simple step is time-consuming.

How Have Screen Capture Functions Changed in Mojave?

Another exciting change in MacOS Mojave is the screen capture feature. In the past, users could only take a quick snapshot of their screens without needing additional software. Many users were fine with using QuickTime or other apps to get the job done, but Apple took note and decided to include updated functionality with the latest update.

Mojave’s built-in screen capture option now allows you take screen recording videos and set timers for when you want the feature to work. There are even special markup tools that will enable you to highlight certain elements you find most important.

How Do You Use Group FaceTime Calling in the Latest MacOS?

Perhaps the most anticipated feature of MacOS Mojave is the ability to FaceTime several individuals in a simultaneous group conversation. While it wasn’t initially included in the release of the operating system, Apple included it in version 14.10.1.

Group FaceTime supports up to 32 callers in a single call, which is especially handy for business users who want to add a particular element to video conferences or just those times when you want to get the family together virtually to share important news.

What’s the Stacks Feature in MacOS Mojave and How Does It Help Productivity?

If you’re like most people, your desktop organization skills need a little help. From old documents that you no longer need to icons that are just taking up space, it is easy to get overwhelmed by the digital clutter. That’s where the Stacks feature really comes in handy.

With a simple mouse click, Mojave’s handiest feature groups similar files together and “stacks” them on top of each other. Users have a choice on how this happens, for example by date last used, file type, or different classification categories. This add-on makes it easy to tackle your digital file keeping while giving you the appearance of a nice and clean desktop.

And Apple didn’t just stop there with these five features. A special dark mode feature provides a darker color scheme that’s less harsh on the eyes after a long day of work. For those who enjoy expressing themselves, an additional 70 more emoji now make it easier than ever. And a redesign of the app process is paving the way for a future ability to run your favorite iOS programs on your laptop or desktop. 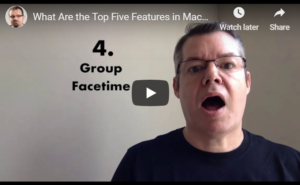 These new features in MacOS 10.14 Mojave make everyone’s life just a little easier. Which one do you want to try out first?